My wife and I would like to help a group of women form a small sewing business. We are looking for such a group and would welcome suggestions.

There is no charge for this, and we are not connected to any church or other organization.

We have done this successfully in Madagascar, Tanzania, and most recently, Kenya.

A few years ago a doctor we know told us about the people he had met in some of the poorer communities he had visited 8 in Africa and Asia. He said many of the women there told him they could sew  and would like to make some money sewing, but could not afford a machine and did not know how to operate a business.

My wife, Caye Poe, has had much sewing experience. She decided we could help some groups of people set up small sewing businesses. 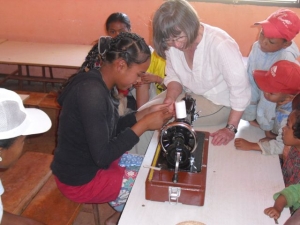 As I said, we have supplied machines and helped set up businesses with no charge to the people. And we have no connection with any group; it’s just us two.

Our first project was at a private school in rural Madagascar. We knew of a Canadian woman who had formed it We went there for two months. There was no electricity, so we  bought manual machines in Madagascar and took them to the school.  The older girls and mothers from the area were very pleased, and used the machines to teach sewing, make uniforms, and repair clothes.

We found that the manual machines were poor quality, so we decided to only use electric machines from now on.

Next we were invited to a small orphanage in rural Tanzania. The orphanage had a crafts program and a few old sewing machines.  We brought in  six new machines, plus cutting equipment, and bought material at a local market.

We visited some Tanzanian cities and towns, and found that the most profitable item would be colorful shoulder bags for  tourists.

About ten women now work in the orphanage craft room making bags, plus uniforms, and other items as well.  All the women receive money from the sales, and some money also goes to the orphanage.

Our third project, which we finished in early 2017, was in Kisumu,  Kenya. We took in  eight sewing machines and helped a locally-run social group, Garden on Hope, expand its operation.

We are now seeking another place to create a similar sewing operation.

We have a few requirements.

2: The sewing machines must be kept at a single place. This allows two or three people to use a single machine at different times. If the machines are put in separate homes they often get sold or broken.

The best place for a sewing room is with some organization such as a school, clinic, social agency, church or business.

3: The women (or it can be men, too) must already know how to sew. Caye will show how the new machines operate and will give tips on various techniques, but she is not conducting sewing classes. We are concentrating on organizing and on find markets. We hope to have a small business set up and operating within a few weeks.

4: We need to be able to bring in six or eight sewing machines without unreasonably large customs and duty fees.

We usually stay for six weeks or so. For perhaps the first four we help set up the business. We would like to spend another week or two seeing other parts of the country.  These times can be altered.

We will take care of all our own expenses.  We would like to rent a low-cost apartment or rooms. We do not want to have to pay full rates at a large tourist hotel.  We will provide our own food. 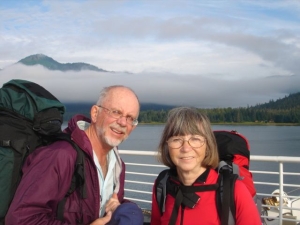 We are both Americans in our mid-seventies. We live in the small town of Dayton, Oregon. We are in good health and are physically active.   I have poor eyesight but can get around all right.

Both of us have had experience living abroad. We both taught in India for six months, and have visited places such as Egypt and Thailand. We enjoyed ourselves and made good friends in all those places. We feel confident this will occur again on our next trip.